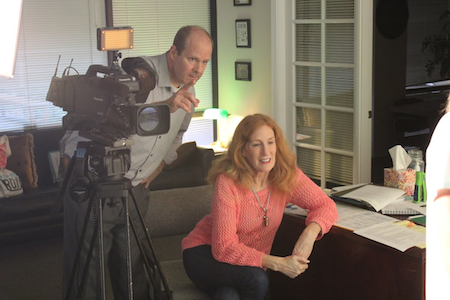 Working with Lynne Matallana, CEO of the National Fibromyalgia Association
Stories Sell.
A good story is the one consistent thing that moves people to take your call to action and to share your message on social media.

That's what I love to do for my clients: get to know them so I can tell great stories that convey trust, authenticity, information, and engage the emotions of their target market audience. Only the right kinds of stories will get your audience to do what you'd like some of them to do: connect, share, and eventually become customers. 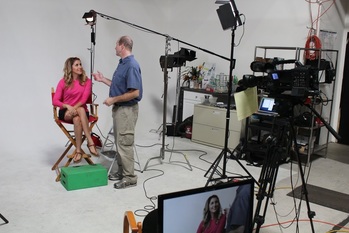 Preparing a guest for an on-camera interview
So who's this Kevin Campbell?
I've been writing and producing content for more than forty years, since I was a teenager making Super-8 films and screening them (for a profit!) during lunch breaks in the school cafeteria. In grad school in 1981 I produced a half-hour documentary for the local PBS affiliate in Lawrence, Kansas, and I was hooked. After college I worked in TV news, doing everything from writing, shooting, editing and even some on-camera reporting. I wrote and produced TV commercials and corporate videos (for small concerns like Cessna Aircraft and Rent-A-Center). In the late '90s I wrote and produced a feature film comedy that I sold to Lionsgate Entertainment (the same folks who brought you the "Hunger Games" franchise). During the current decade, I've created television pilots and local shows on Fox-31.

Way back in the pre-Internet '90s I wrote several video books ("Make Money With Your Camcorder") along with articles for video trade magazines such as Videomaker, Videography, and Wedding Videography Today. Currently I have a course on Udemy called "Go Hollywood: Boost Your Business with Video Story Selling," and two courses on Curious.com: "YouTube Marketing for Beginners" and "Story Selling for Small Business." And I was once a guest on "The Tonight Show" in 2006 pitching my screenplay at the Creative Screenwriting Expo in Los Angeles (see the video link here).

It takes much more than pretty pictures to make an effective marketing video. It takes a great story, and I've been telling them for decades. Which means I can tell a great story for your business and customers. 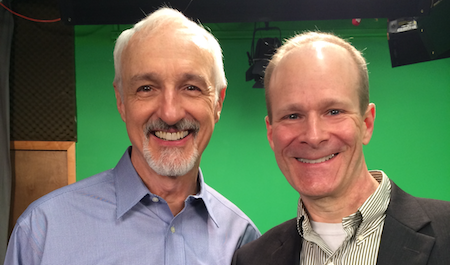 Hanging with Michael Gross, star of "Family Ties" and "Tremors."

I've got some awesome people helping me do this crazy video thing.
Read about them on our new website: VideoLMS.biz